Score! Josephine Hvid was sharp and determined in her application, prepared thoroughly for the interview – and got the job. Here she explains how it went down. 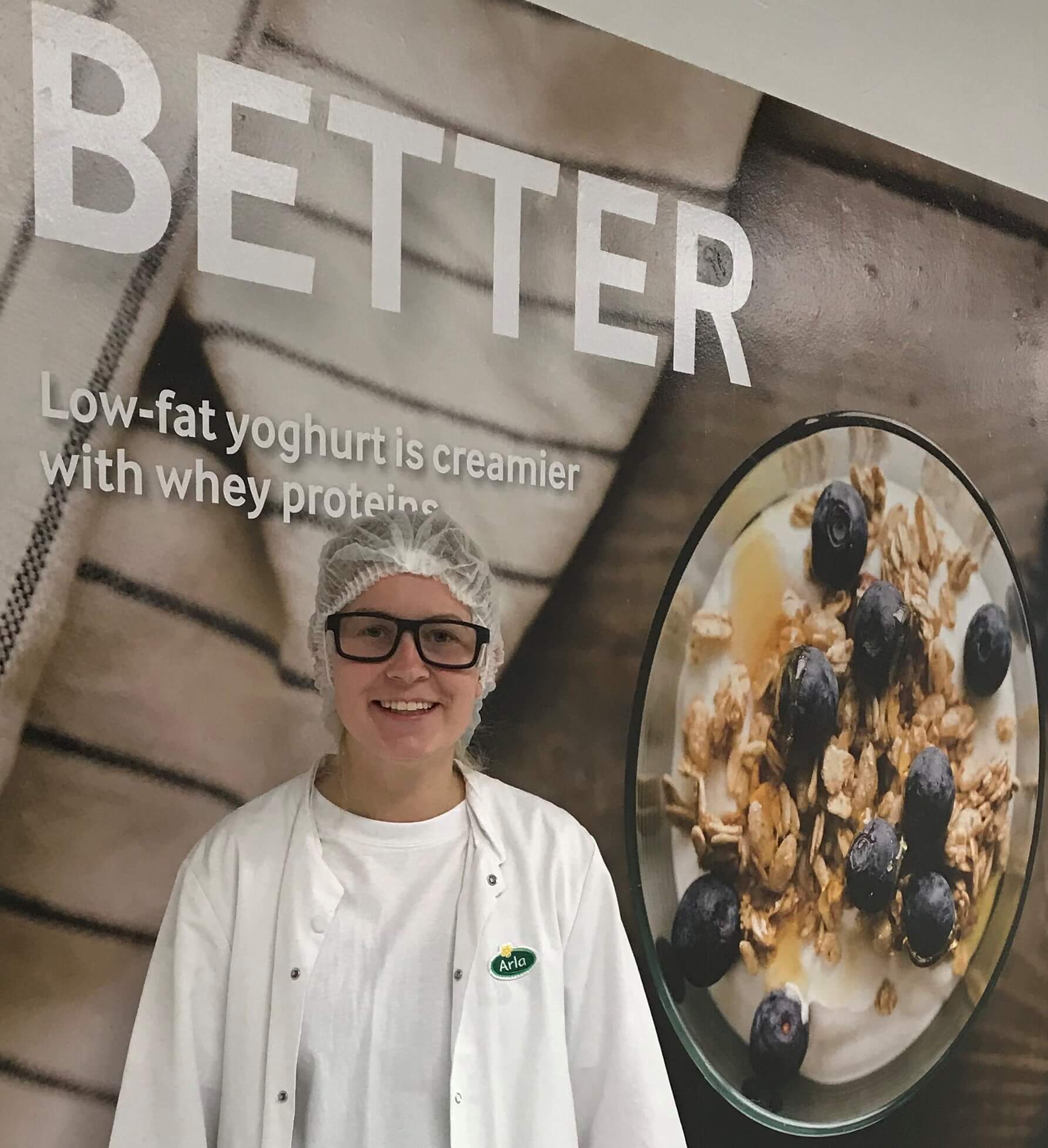 ‘Are you ready to get groundbreaking experience in product optimisation? And do you want to be a part of a large and quickly growing organisation that develops unique products from whey as a part of one of the world’s largest dairy companies?’

Yes, so ready, thought Josephine Hvid, when she saw the job listing from Danmark Protein, a part of Arla Food Ingredients, which is an independent company in Arla Foods, last summer.
“Especially the optimisation part spoke to me. I think it is challenging to work with how to, for instance, use less water and heat in production and use the raw materials in a better way,” she says.

Therefore, she was thrilled when she was asked to come in for the first interview. She did a large part of the preparation for the interview at home.
“When I applied for the position, I had targeted both my application and my résumé for the position and the company. I had looked into what products they are making and which knowledge I had that could match them. I haven’t worked so much with milk before, so my strengths in relation to Danmark Protein lay more within the technical and chemical aspects and the methods I know of,” tells Josephine Hvid.

Have a good answer ready
As preparation for the first interview, she read her application and her résumé thoroughly.
“Many have probably done several applications, so it may be hard to remember what you wrote in the specific application. I wanted to be sure of what I had written, so I could imagine what they may ask me and have an answer ready. I looked through the listing to find out what they were looking for. I wrote it down in my notes and then wrote down what I could offer compared to their wishes,” she says.
She was also pretty certain that she would get a question about what ‘she could say about herself’. “So I had written down a little elevator pitch, where I mixed in some of my personality. I had it rehearsed, so it would sound fluent,” tells Josephine Hvid.

Important interview
For the first interview, the questions circled around Josephine as a person. About temperament, patience, thoroughness, and the ability to create relations.
“They asked about where I lived and whether I was ready to move. Danmark Protein is in Videbæk, two hours from Aalborg, where I used to live. I think they believed that it would be unrealistic in the long run, if I planned to commute two hours each way – every day.
They wanted to hire a person, who wanted to stay in the position for several years. Right now I live in Videbæk, but at some point my boyfriend and I might move to Herning or Viborg, where he can get a job,” she says.
Was she relaxed during the interview?
“No, I wouldn’t say so – and I never think you will be. You are in a situation, where you are judged and want to do your best. And finally I wanted the job, because I have always thought it would be exciting to work with food, and I think optimisation is an interesting task. In this job, I could get both,” she says. 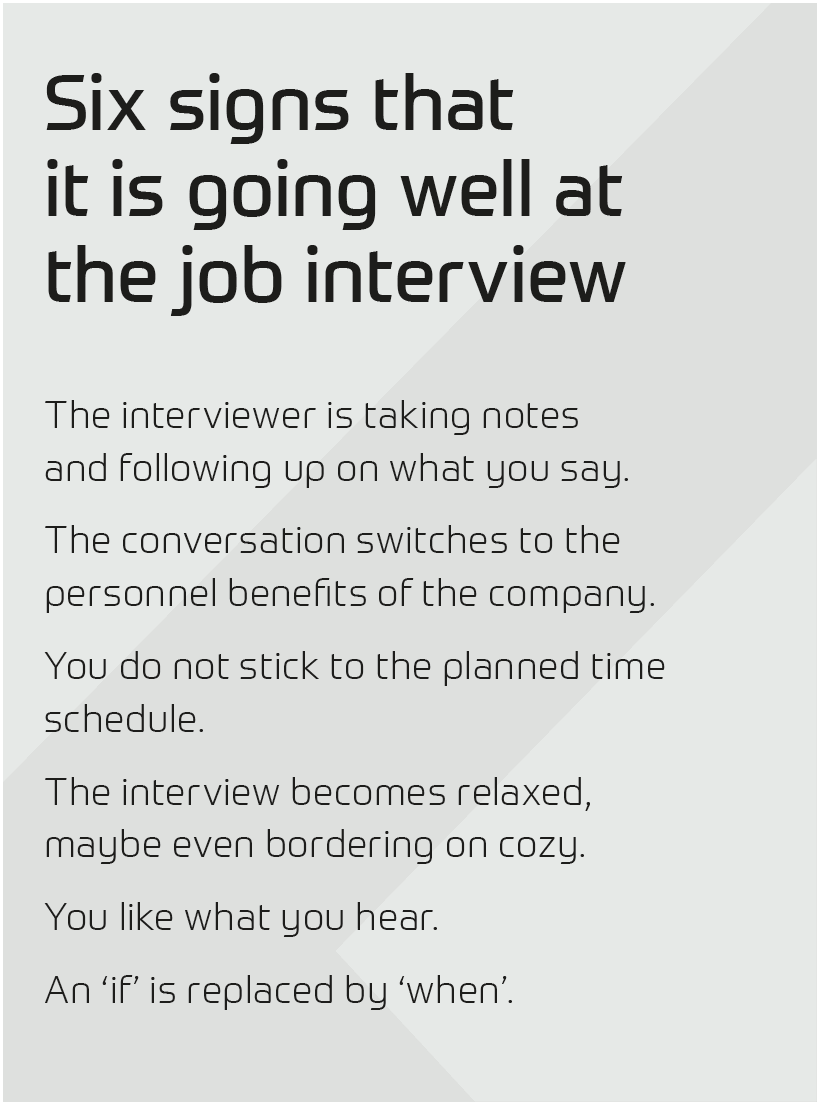 There was great happiness, when a week later, she got a call, where she was invited for a second interview. “I was so happy and actually also surprized. Again I read up on my résumé and my application, but did not do much else to prepare myself,” she says.
The next interview was very different than the first.
“Between the two interviews, I had filled out two tests, and the next interview was very much about them. But we also talked about what I had previously worked with and for instance how I would handle conflicts and different work situations. It was a question I needed to think about. Then it is easier to answer who you are as a person. You can do this in many ways and make yourself look more or less positive. I think it is very important to be honest, but you have to really put your words in the right way,” Josephine Hvid says.

Similarly to the interview, it was not a relaxing situation.
“Afterwards, I did not feel like I could have done a lot differently – I felt I had done my best. When I got a call that I had gotten the job, I was both surprized and happy. I have studied for a long time, and now I am done and even got my first job. I was simultaneously happy and relieved,” she says.
Only salary negotiation was left.
“I got an offer for a salary that was very close to what IDA recommends, so I said yes. I think that, as a recent graduate, you say yes please to what you are offered. Because it is crazy to come from SU and suddenly get it sevenfold,” says Josephine Hvid.