With an internship abroad, you risk feeling very alone for a period of time – because you are. But you get experiences for a lifetime, says Jan Andersen from Middlesbrough.

Many may think of football, when they hear of the northern English town, Middlesbrough. That is not true for Jan Andersen, who is getting his master’s degree in Operations and Innovation Management at Aalborg University. For him, the town overlooking the North Sea will always be connected to four months full of experiences during his studies.

Jan is an intern in the Danish and international towing company Svitzer that owns a fleet of 430 tugs and more than 4,000 employees across the planet. “It is my responsibility to look into how orders are executed in different docs. It is not the same in London as in Liverpool, for instance, and I am trying to make sense of it. Therefore, I am travelling through England and talking to different users. I look into whether you could do things in a different and smarter way. Whether this ends up being my specialty, I don’t know, but it is a possibility,” says Jan Andersen. 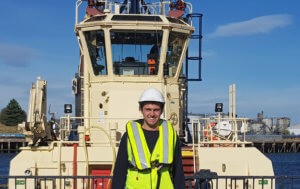 At first, Jan Andersen considered doing a semester abroad, but he wanted to challenge himself more and get some different experiences. It ended up with an internship in Middlesbrough. Private photo.

Going abroad was tempting
During all of his studies, he knew that one way or another, he would spend some time abroad. “At first, I considered doing a semester abroad, but I wanted to challenge myself a bit more, and get some different experiences that I could get with an internship. In my study, we have a great chance to plan the second to last semester ourselves, and I figured I could use this to learn how it’s done in the real world,” he says. It turned out to be easier said than done. “It was actually pretty hard to find a company in another country that offered internships. It took a lot of time. I contacted everyone in my network who worked with companies that may have contacts abroad. And in the end, I succeeded,” says Jan Andersen.

Far from home
It is also a challenge to move to a new country and a new workplace, in relation to friends and social life. “In northern England, I was far from friends and family. You have to know this. You risk feeling alone a lot. But I also travelled a lot and didn’t stay at the same place for too long. That made it harder to meet people. Then it was a good thing to be able to have fun alone, because after work, you can’t just go to someone you know, because you don’t know anyone,” says Jan Andersen.

But despite of the challenges, he knows that the trip gave him valuable experiences. “I have gotten insight into what it is like to work in an international company. Everything from how to make contact over email to how much to talk and be active in meetings. It is a different role than you have as a student. It has also made me grow as a person to be alone a lot and stand on my own two legs. And then the trip naturally strengthened my language skills – I am much better at understanding English dialects now, for instance,” he says.

Thinking of the future
In the long run, he thinks the trip will be good for his career. “Generally, I think it is an advantage to have experiences from a foreign country, and I hope that my internship can open up job possibilities at Svitzer,” says Jan Andersen.

He does not hesitate to recommend others to do an internship abroad. “If you have the chance, do it. Jump into it. Whether it is a positive or a negative experience, it is an experience for a lifetime. You study at an university for so many years that all look alike, but those four months abroad will always be something special. But you have to be prepared that it will not be as safe as being in Denmark. It can be a challenge to be alone so much,” says Jan Andersen.