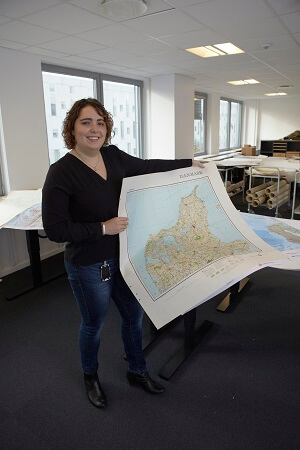 Cathrine Gylling Jensen, who here is at the Danish Geodata Agency.

Catrine G. Jensen probably never imagined that searching for road signs in the municipality of Aalborg would take her to Copenhagen two years later. None the less, this is exactly what happened, and Catrine is very pleased the she, as a student worker in Aalborg, was asked to locate road signs for a theme park that had recently closed. “We were uncertain of where these signs were placed,” says Catrine. Finding them sparked her interest in recording. She would drive all over Aalborg several times a week, recording and photographing signs. Although this task was sometimes tedious, it was relevant for her studies to become a land surveyor. Her passion for mapping pushed her in the direction of another student job with the Danish Geodata Agency. Catrine spent one year working on various data analyses such as one about agricultural marginal zones – a politically explosive topic at the time. When she neared graduation, she was encouraged to apply for a position in a section of the agency located in Copenhagen.

“I was lucky to be granted an interview, and it was really cool that I already knew so much about their work,” explains Catrine. For two years now she has been on the payroll with Styrelsen for Dataforsyning og Effektivisering, which is situated in an anonymous building in the Northwestern part of Copenhagen. “I am glad that my current job is located somewhere different than my student job,” Catrine continues. Changing roles is good – as a student worker you are often given routine tasks while you are eager to help define the tasks and plan them when you have recently graduated and have landed a new job.

Student job ­experience: Private land surveyor ­during the summer holidays, working on partitioning plots for one-family homes. Course secretary at Folkeuniversitetet in Aalborg and volunteer at Studenter­huset in Aalborg – two years were spent on tending bar etc. and another two years were spent as a board memeber. Chairman of a volleyball club in Aalborg Studenternes Idrætsforening. Two years with the Municipality of Aalborg at the department of urban and landscape management and one year at the Danish Geodata Agency.

The professionally relevant student jobs inspired Catrine to specialize: “My bachelor study was divided in to topics, and only when I was given the job in the the department of urban and landscape management in Aalborg, it occured to me that mapping and surveying was interesting. Obviously it was a trivial task to locate white signs with blue lettering, but it inspired me to work on other common municipal problems.” Catrine’s experience worked to her own advantage in her job with the Danish Geodata Agency and in her current job, as it allows her to put her practical knowledge to good use. “Because I am familiar with trivial routine tasks, I can help optimizing and streamlining the collection of data. This type of experience is something I would never have gotten at university.”

Catrine has held several student jobs: “You are not obligated to have a student job, but it is fun to test yourself in a new job.” Catrine finds that her volunteer work has been beneficial as well. Her work as a board member at Studenterhuset in Aalborg let her gain experience with budgeting and staff responsibility. “I have typically stayed in one job for a couple of years and it has helped me narrow down my very broad study. I decided to work for the government because I am excited about drawing the grand lines within the geodata area,” says Catrine and mentions that she is currently working on making the data of private and municipal utility companies comparable. “As an example, the readings of water consumption are reported differently. In one municipality, clients are divided into A, B and C categories. Other municipalities use a number code to differentiate clients. The standardizations we are working on are both political and practical, as we want to encourage competitive prices and save time when reporting.”