Many foreigners have a hard time getting used to Denmark and the Danish etiquette. For instance, the dark humor can be hard to swallow. Not to Jose Quaresma, though. He enjoyed the film ‘Blinkende Lygter’ long before he could turn off the subtitles. 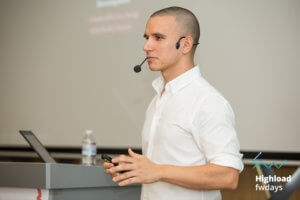 There are 2,284 kilometers between Portugal and Denmark. But to Jose Quaresma, neither the physical nor the cultural distance was troublesome.

“Yeah, maybe the weather. When I lived north of Stockholm during my Masters, I saw the sun twice in December. It was hard. Then it is already better to move back to Denmark,” he says.

Five years ago, Jose Quaresma finished his PhD at the institute now called DTU Compute. Ever since, he has been employed by Accenture Technology, where the focus lies with helping customers implement projects.

Learn the language
After some years in Denmark, Jose Quaresma realized that it was important for him to know the language.

“When I left DTU, I knew a bit of Danish. I had followed different courses for foreigners, but was in no way fluent. Though many Danes are good at English, I experienced that when they turned to Danish – which often happened when they were in smaller groups – there were a lot of nuances I lost, and then I was an outsider,” tells Jose Quaresma.

When he started working for Accenture, the need to learn Danish became more pronounced.

“My first customer preferred speaking Danish. It was nice that Accenture asked if I wanted private lessons in Danish. I would recommend others do the same,” he says.

Room for the whole life
Jose Quaresma never worked in a Portuguese workplace, but he senses that there are some differences.

“I think that, here in Denmark, you are more focused on working while at work. You have your job, and then you have your friends and family on the side of that, and they mean a lot. Therefore, it is common to leave by four o’clock, so you can pick up your children. I gene­rally feel that it is a good thing that you can focus on your work, your family, and your own wellbeing. That there is room for it all,” says Jose Quaresma.

He also mentions that, compared to ­Portugal, there is more honesty in ­Danish workplaces.

“In Portugal, you often see a form of corruption. I will not say that it doesn’t happen in Denmark, but if it happens at a manager level, it will have consequences. That doesn’t always happen
in Portugal,” he says.

“Here in Denmark, there is a very flat business structure and a casual relationship towards your boss. It does not mean that you do not respect him or her, but you respect the boss as a person for the experience and knowledge they represent, and the boss is often open to discussing problems,” says Jose Quaresma.

He experienced the opposite in the USA, where he stayed during his PhD.

“In Denmark, I felt that my supervisor at DTU and I had a partnership. We could discuss solutions and listened to each other. In the USA it was completely different. My American supervisor gave me orders. I remember that I discussed a presentation with her, and she just said: ‘You have to do this and this’, rather than us talking about it,” he says.

High quality of life
If you look past the weather, Jose Quaresma has a hard time finding negative aspects to living and working in Denmark. Even the dark Danish humor is to his taste.

“I love it. I remember I watched ‘Blinkende Lygter’ long before I could do without the subtitles,” he says.

And if any of his Portuguese friends should ask if it would be a good idea to move to Denmark, he knows his answer.

“I would recommend it. You get a high quality of life here in Denmark. I only know of the IT business, but there are a lot of opportunities and exciting work with skilled people. And if they asked me if you could get used to the Danish work culture, I would say: yes, apparently so,” he says.