Good grades might get you an interview, but it will not necessarily get you the job. 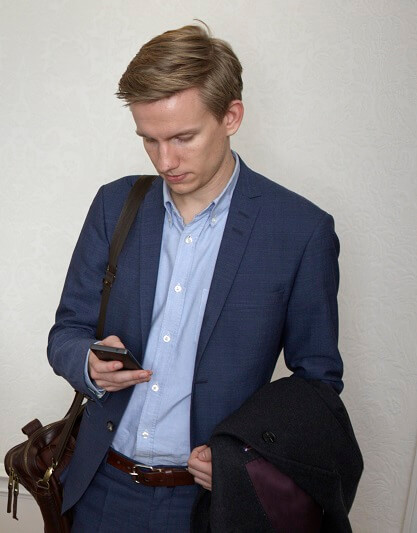 Christoffer Samuel Nielsen never tries to conceal his competitive personality. He enjoys comparing himself to others and wants to do perform better than average. “Since my final time in upper secondary school I have been used to getting good marks, and it has given me a boost to land a high score,” Christoffer explains, when asked to account for why he believes good grades are vital. While he was still a Computer Science student he had already spoken to representatives from the IT business, Netcompany, because he had helped arrange the DSE fair in Aalborg several times as a DSE volunteer. “I wrote down some questions beforehand in an attempt to find out what my possibilities were. I think I asked about my options in order to gain responsibility and manage some tasks myself. The HR people you talk to at job fairs are capable of seeing that these questions point to an ambitious person.”

So once Christoffer sent his application to Netcompany he included a transcript of his grades. “My grades got me the interview and a positive start to the meeting,” Christoffer says while emphasizing that good grades do not necessarily mean that you will get the job. “During the first interview, they pulled out my transcript and praised it. A single grade was not as good as the rest, and I needed to explain that I hadn’t prioritized this particular subject at the time. That was my honest answer.” Christoffer found that his good grades calmed his nerves while he was interviewing for the job. He completed his BA with GPA of 10.4 and his MA with a GPA of 11.3.

Christoffer went through two interviews and a final meeting to sign his contract before he landed the job. He signed the contract on May 1st and never regretted spending some of his valuable thesis writing-time on getting the job. “It calmed me in terms of finishing my thesis because I knew I’d be starting my new job on August 1st. It is bad to postpone applying to jobs until after you hand in your thesis since many companies are out for the summer throughout July,” Christoffer states.

Christoffer is currently employed as an IT-consultant for both private and public clients. His job description includes some sales-related aspects but is largely centered on programming and designing IT solutions – and his job is project-based just as his studies were at university. At home in Aalborg, Christoffer’s job is 5 minutes away by bike but on average he spends every second week in Copenhagen. “We roughly work a little more than 40 hours per week, but no more than 50 hours – my average is 41.5 hours,” he says.

He has chosen to work at Netcompany because it is a company that clearly favours young employees and invokes a sense that it is ok to be ambitious: “I expect to be promoted in 2-3 years and becoming a mid-level manager in 5-6 years. This can be openly discussed, although promotions and pay rises are not specifically linked to age or seniority.” For this reason everyone in the company is paired with a mentor with whom they are able to discuss their personal and professional development. A mentor is usually an employee with more experience than you.